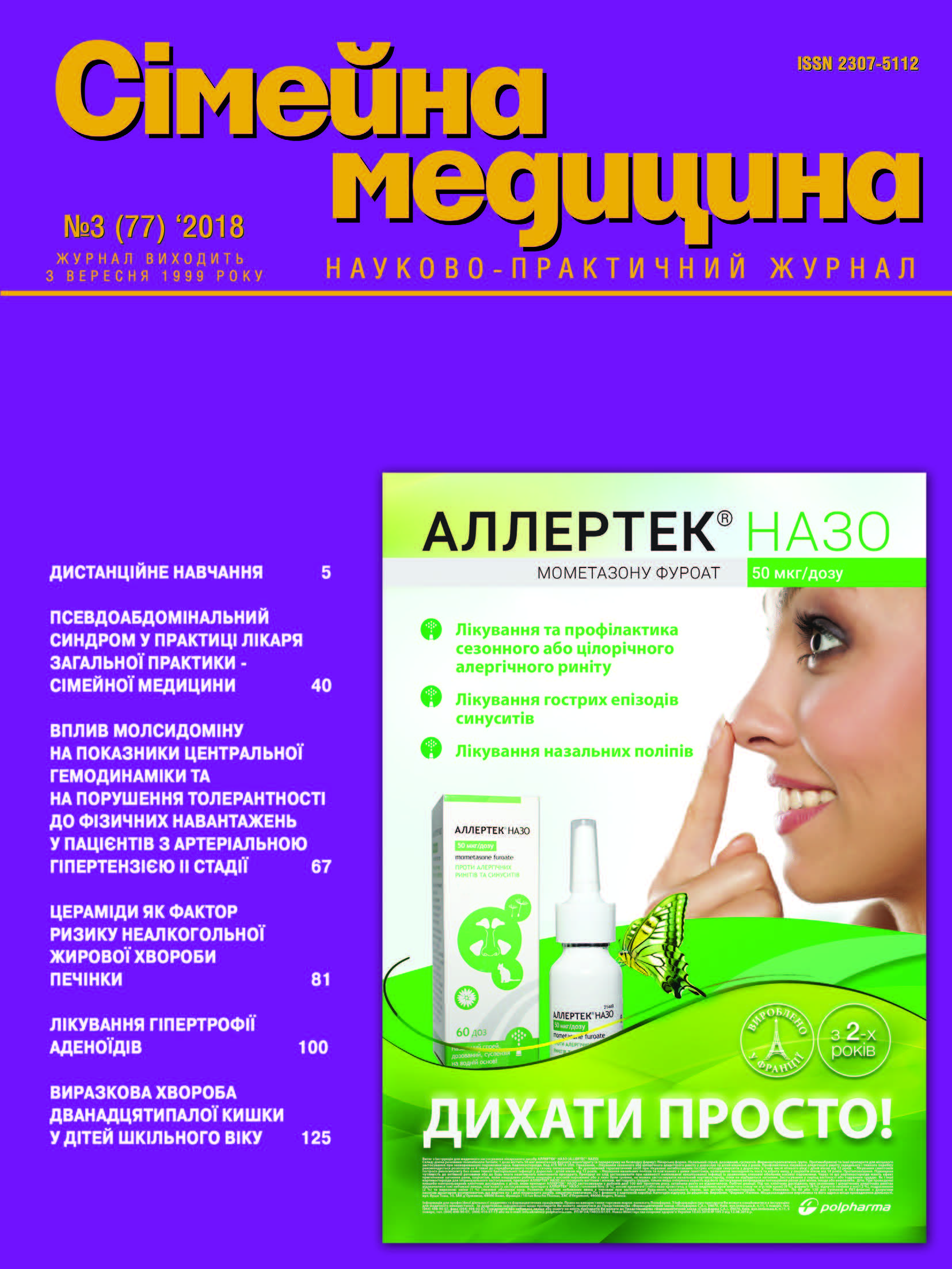 Today in Ukraine up to 73,3% of all deaths occur in three classes of causes of death: circulatory system diseases, external causes of death and neoplasm. The first place is occupied by diseases of the circulatory system (30,67%). At the same time, more than a third are patients with AH. Among residents of cities, this figure is 30%, and in rural areas – 36%. However, AH is a significant risk factor for coronary heart disease. According to the latest official data, the prevalence of the combination of AH and IHD among the adult population is 63,3% of cases, the incidence is 58,8%.

The objective: to study the effect of molsidomine (Sindhnopharm) on the indices of central hemodynamics and the violation of physical activity tolerance in patients with stage II arterial hypertension without obvious clinical signs of coronary heart disease.

Materials and methods. The survey included 100 patients with stage II AH without obvious symptoms of stable coronary artery disease, the mean age of which was 59,2±1,7 years. All patients were examined at the beginning of the study and after the treatment, provided by modern standards of curative treatment of patients with AH. The results of bicycle ergometry, daily monitoring of ECG and echocardiography standard therapy was performed according to the national recommendations. Patients of the first group in addition to the main treatment was assigned sidnofarm in a dose of 2 mg twice a day for 3 weeks.

Results. When performing daily monitoring of the ECG, it was revealed that 46 patients (92%) and 44 patients (88%) of the second group had attacks of «painless ischemia» from 1 to 3 attacks within 24 hours, up to 4 minutes maximum. In both groups before the treatment, patients with low and medium tolerance to physical exertion (according to the results of VEM) prevailed. And a violation of the diastolic function of the left ventricle (echocardiography). After the examination, patients were prescribed treatment for three weeks. Patients of the first group received basic therapy, according to treatment standards. In addition to the main therapy for these patients, sildnofarm was added at a dose of 2 mg twice daily.

Conclusion. The use of Sidnofarma 2 mg twice a day has a positive effect on the symptoms of ischemia in patients with Stage II AH. Against the background of Sidnofarma, the number of seizures of «painless ischemia» was significantly reduced in comparison with the second group. As the results of the study showed in the patients of the first group, who received additionally sydnofarm to the basic therapy, the tolerance to exercise was better. The number of patients who reached the load of 100 W was 50% greater (1 group 46%, the second only 26%). Also, among the patients of the 1st group there was not one who would stop at a power of 50 W, while in the group of 2 such patients there was 10%. Thus, we noted that the stabilization of blood pressure in patients with AH of the second degree increases tolerance to physical exertion, but using sydnofarm can achieve significantly better results, even in a short period of treatment. Taking into account the obtained data, it is advisable to recommend the use of sidnofarm to patients with stage II arterial hypertension, even in the absence of clinical manifestations of stable coronary artery disease.

This work is licensed under a Creative Commons Attribution 4.0 International License.

Authors retain the copyright and grant the journal the first publication of original scientific articles under the Creative Commons Attribution 4.0 International License, which allows others to distribute work with acknowledgment of authorship and first publication in this journal.